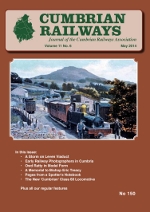 This issue of the Journal seems to be a Peter Robinson special and I am very grateful to Peter for providing some very interesting articles and notes. However, the Journal is for everybody to read and to write for. So I would appeal (again) for others to put pen to paper and come up with some articles for us all to enjoy. You will also note that there is a distinct lack of correspondence for the letters page. Whilst a number of topics are covered under the heading of the ‘Electronic Telegraph’, other features in Cumbrian Railways must be worthy of comment, so if you can’t do an article then perhaps a letter will suffice. Over the years we have had an eclectic mix of material within these pages and it would be nice to continue in this vein.
If you would like to submit an article or you are unsure of how to go about it, please get in touch and we can sort something out.
The chance meeting of an old friend at a local model railway show brought back some happy memories and resulted in an article about the construction of a model of a Cleator & Workington Junction Railway locomotive. When the project was being planned, I was honoured when Charles Vier asked me if I could supply information on the engine and was flattered to be invited to visit the Sherwood Section to see it in operation. Being allowed to operate the layout was a privilege but it was both enjoyable and taxing and the tea afterwards was something to remember. Charles and Richard Kelly were kind enough to write a few words about how the model came into existence, illustrated by a photograph taken by Richard.
Another chance meeting at another model railway show resulted in the article on a model of the Ratty in the early days. Peter Kazer had a wonderfully evocative model on display and whilst it has already appeared in the modelling press, I thought that it would be of interest to a wider audience. I approached Peter quite out of the blue and he was very happy to provide a piece for the Journal and am indebted to him for providing us with a very good article.
As you can understand, I enjoy going to model railway shows and have my ‘regulars’ I make every effort to get to. As well as admiring the undoubted skills of some very talented modellers, it also gives one a chance to meet up with people with similar interests. A number of them are involved with other railway line societies and it is always useful to take the opportunity to compare notes on the way things are run by other organisations. As well as getting a cross-fertilisation of ideas, much more is gained from these contacts, promoting the Cumbrian Railways Association to a wider audience is one benefit.
Our Secretary, Philip, gets to a number of shows as well as being the organiser of an important one in the north west. He mans the stand with helpers and it is a useful source of gaining new members and the sales of our products makes it all worthwhile. It is always an enjoyable experience and if you feel you would like to help with manning the stand, please get in touch with Philip direct.
Our Associate Editor, Eliot Andersen is now on board and has been involved in the production of this issue of Cumbrian Railways.