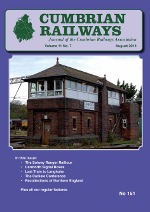 I am indebted to those members who have sent in kind comments on the last issue of Cumbrian Railways, they are very much appreciated. I like to think that we are able to cover a wide range of subjects and periods in the history of Cumbrian railways, particularly as there is a lot of interesting things going on in our area even today. This is an approach that is not the usual fodder of other line society publications that seem to apply very tight time constraints on their content, though many of them have picked up on some of our other regular features to use them in their own way.
The aim is to keep a good balance of coverage of the history of the railways of the county. In achieving this balance, we depend on other organisations and authors that are happy to let us have access to a wider range of material. The agreement of Wild Swan Publications to allow the use of their images of the model of the Ratty is appreciated, as is the agreement of Dale Howcroft and Kyle Palmer of DRS providing information on their newest locomotive. The former allowed us to record a part of the early history of the Ratty that cannot be captured in any other way and the latter allows us to be very much up to date with a record of the latest types of rolling stock in use. As they say “yesterday is tomorrow’s history” and to be able to use the photographic record produced by Andrew Naylor keeps us very much abreast of modern development.    Saying this, we must not fall into the trap of being too ‘modern’ all of the time; historic coverage remains the most important aspect of the content of Cumbrian Railways.
The material that is included in the Journal depends very much on what people can send me or that I can commission from members or other authors. A case in point of the latter is reflected both in the Ratty article and the one on the model of the C&WJR locomotive. In this particular instance, it was pleasing to be able to record my part in its construction. Both these articles came from chance meetings at model railway shows, which are great venues for meeting like-minded enthusiasts.
The Journal also benefits from the input of a number of you, the members, all making a contribution to the whole and long may it continue.
Our regular feature, Electronic Telegraph, is missing from this issue as Norman Grey, the compiler, has had a catastrophic PC failure and whilst he has managed to get the problem fixed, he was not able to get his report written in time for publication.
As already mentioned in the Lakes Express, Norman Grey wishes to stand down from the task of recording the unique and fascinating material that appears on our chat line for publication in the Journal. His deadline for giving up was during 2014, so, if no one comes forward to replace him, the final installment of The Electronic Telegraph will appear in the October 2014 issue of the Journal. This would be a pity, as over the years, Norman has been able to provide us with a wonderful archive covering a myriad of topics to do with the railways of Cumbria.
We are looking for a volunteer to take on this work for future issues. It involves preparing a piece of some 2,400 words covering the main points of the discussions. There is a rigid deadline date for each issue of the publication but apart from this, how the pages develop over time is up to the writer.
To record the details of the discussions on the chat line is important, not only as a permanent record of what has been said, but as a means of allowing other members to participate in the further development of the themes covered. If you are interested, please let me know.