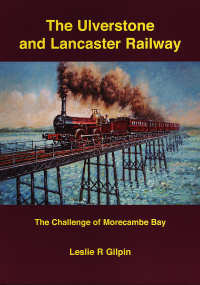 THE ULVERSTONE & LANCASTER RAILWAY
The Challenge of Morecambe Bay
by Leslie R. Gilpin

Morecambe Bay has presented a transport challange since the earliest times. Apart from the rivers flowing into it, the Bay becomes almost a sandy desert at low tides. Thus access in early times was both by ship and road, along well trodden cross-bay routes. Men have tried to tame it by trying to claim the land for agriculture with roads or railways across its embankments.

In this book written by Furness Railway enthusiast and former CRA Chairman, Les Gilpin, we learn of those early methods of communication and how they helped shape the communities around Morecambe Bay. The author explains how attempts both great and small were made to claim the land from the sea and how this was seen as a way of subsidising the construction of the railways.We see how these first proposals were for lines of potential national importance and how they were tempered to the railway we know today from Carnforth to Ulverstone, around the edge of the Bay. The author also explains how the railway led to the exploitation of limestone in the area, together with the development of other industries, especially around Ulverstone.

This book will appeal equally to the railway enthusiast, local historian, industrial archaeologist and those interested in Morecambe Bay. It is well illustrated throughout with photographs, drawings and plans.