COCKERMOUTH KESWICK & PENRITH
A scheme for a railway to Keswick was first made in the mid-1840s, during the period of the "Railway Mania", with a proposal for an extension of the Cockermouth & Workington Railway eastwards from Cockermouth. However, it was not until the growing iron industry in West Cumberland created a need for a quality of coke not available locally that the Cockermouth Keswick & Penrith Railway proposal came forward in 1860 to tap the cross-Pennine route already being built across Stainmore Pass to bring coke from South Durham to the Furness area. In common with the South Durham & Lancashire Union and Eden Valley Railways, the CK&P appointed Cumbrian-born Thomas Bouch, later to design the ill-fated Tay Bridge, as their engineer. 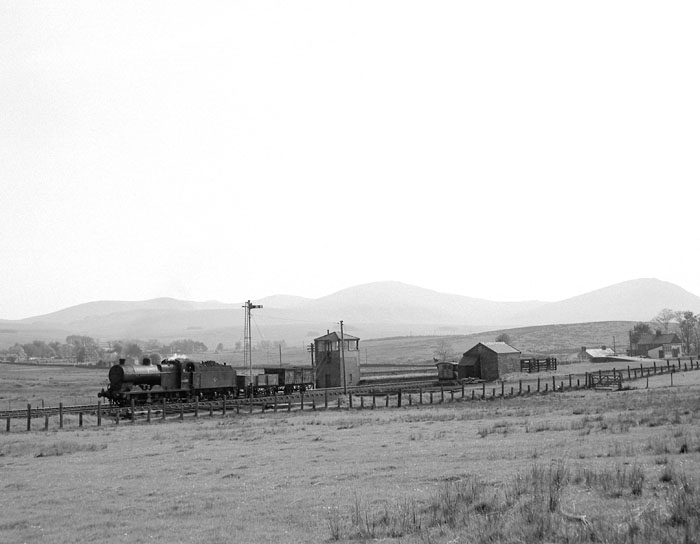 Although an independent company the CK&P never operated its own trains. In 1863 the London & North Western and North Eastern Railways were both empowered to contribute £25,000 each to the company's capital, and later to each appoint two directors onto the CK&P board. Operating agreements meant that from the opening on 2nd January 1865 (two months earlier for goods and mineral traffic) the LNWR worked the passenger and goods traffic while the minerals were handled by the North Eastern, these latter trains working right through to Cockermouth. The NER built its own curve between the LNWR and CK&P south of Penrith to permit through running from the Eden Valley line.

With improvements in the making of coke from West Cumberland coal, the coke traffic over the Pennines declined quickly after 1910, disappearing altogether in the mid-1920s. By then the CK&P had become part of the LMS (London Midland & Scottish Railway) and the continued existence of the line was to depend on local passengers and freight supplemented by tourism. From the mid-1950s, even with the arrival of new lightweight diesel trains, the route's viability was undermined by the private car and more convenient bus services. The section west of Keswick and through to Workington was closed in April 1966, to be followed by the remainder from 6th March 1972. West of Keswick much of the route has since been utilised for the reconstructed A66 trunk road which provides the current transport lifeline for West Cumbria. The section between Keswick and Penrith is the subject of a locally-led scheme for re-opening of the railway.

The CK&P always enjoyed a service of passenger trains running through between Penrith and Workington, with some trains starting at Carlisle. Weight restrictions limited the size of locomotives for so steeply graded a line, most passenger trains being worked by LNWR and later 0-6-0s until the early 1950s when new LMS Ivatt Class 2 2-6-0s provided a short inter-regnum until local services were taken over by new British Rail diesel units in 1955. East of Keswick, however, a programme of bridge strengthening in the 1930s allowed larger main line locomotives to run through on excursions from Glasgow, Newcastle and elsewhere across the north.

After closure of the route west from Keswick extensive rationalisation took place to reduce operating costs on the remaining section to Penrith. Stations were destaffed, double-track sections reduced to single line, signalling removed and signal boxes closed so that the line operated only with one train at a time. Although County Council surveys revealed a high degree of dependence of the local tourism industry on the railway, approval to closure was granted with the final day in a snow storm in March 1972.


See also The Cockermouth Keswick & Penrith Railway in 1921, from the Railway Year Book.