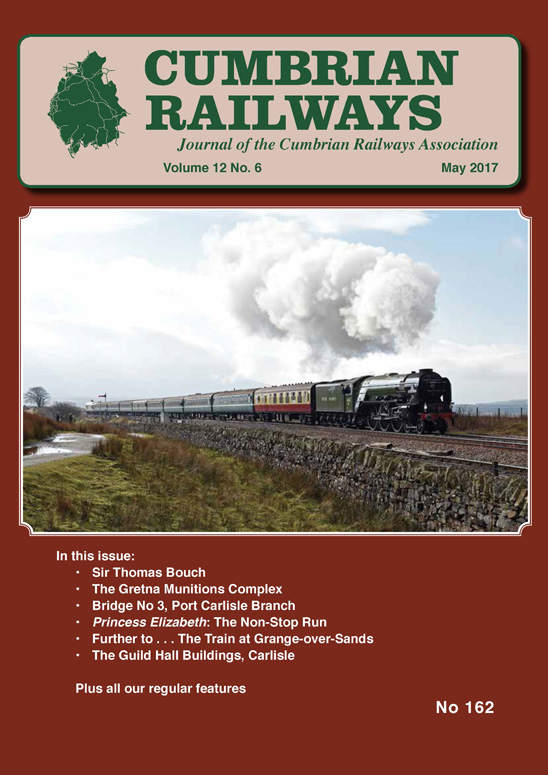 In a recent copy of the Lakes Express, I noticed that the Cumbria Industrial History Society was presenting a talk on Thomas Bouch by John Mather. Bouch had a large impact on the railways of Cumbria so I got in touch with John and asked him for an article for this publication, which he readily agreed to.

Whilst working up the article ready to place in this issue of the Journal, I turned to my regular and reliable source for anything on Civil Engineers — Carol Morgan — The Archivist of the Institution of Civil Engineers.

With her usual efficiency, Carol searched the material she holds on past members of the Civils but was unable to come up with anything on TB, except copies of two images she had found on the web.

It seems that his existence has been completely expunged from the collective memory of civil engineering. When I mentioned this to the author, he was disappointed. To ignore a man that was a prolific builder of railways and structures is a distortion of the truth. Facts are facts and should be recorded as such. The truth that the South Durham and Lancashire Union, the Eden Valley and the Cockermouth, Keswick and Penrith Railways existed is indisputable but the undoubtedly dreadful events that stemmed from the collapse of the Tay Bridge is no reason why the establishment should ignore his place in railway history.

By publishing this short résumé of his work in Cumbria I hope it will go a little way towards re-establishing Thomas Bouch as an important railway engineer as well as letting us learn about this work. My thanks to John for providing the article and the images that help to illustrate it.

A member kindly sent me a cutting from RAIL magazine of 1st–14th February 2017 and a piece by Philip Haigh, discussing the need to overhaul the lines and increase capacity prepared by Cumbria LEP (local enterprise partnership) to boost support for the nuclear industry, shipbuilding in Barrow and current coal mining activities.

The LEP lists four priorities: advanced manufacturing growth, nuclear and energy excellence, a vibrant rural and visitor economy, and strategic connectivity of the M6 corridor. It views the improvement of the coastal railway as “mission critical” for the county. It calls for more capacity on the route, including new sections of track and improved signalling and line speeds. It describes road access to the areas as being indirect and relatively poor.

They want to see the 16-mile block section between Maryport and Wigton converted into three sections to increase capacity, Parton’s 15mph restriction lifted to 45mph, reinstatement of double track into Whitehaven station from the north, longer signal box opening times, bi-directional loops between Corkickle and Mirehouse Junction and double track from there to St Bees, two sidings at Moorside for the power station, a south-facing connection into Drigg sidings and higher speeds at Foxfield (currently 20mph) and Kirby-in-Furness (25mph).

Whilst the report acknowledges that stock shortage has been recently eased by the use of locomotive-hauled stock powered by the Class 37 locomotives, there still remains the existing stock which is deemed as ‘old and unattractive’ and that insufficient signalling hampers their operation.

The Cumbria LEP considers that electrification of the line is the answer, together with investment in other parts of the infrastructure, but as we have seen, such proposals come and go and, with the industrial action endured on Southern lines migrating to other parts of the parent company’s railway holdings, the future looks even more grim.

Whatever happened to the ‘Railway the North could be proud of’ that Alex Hynes, then Managing Director of Northern Rail, spoke so eloquently about at the CRA meeting at Burnside in November 2014?